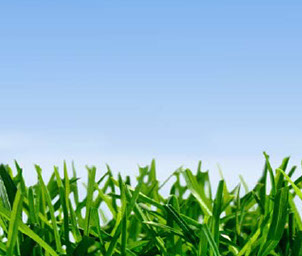 What is HGT™ Bluegrass?

HGT stands for Healthy Grass Technology, a tough and disease resistant Kentucky bluegrass. Barenbrug developed HGT in harsh climatic conditions, specifically to withstand diseases, pests and traffic. Extensive testing in various climates and conditions has proven HGT a winner. No other Kentucky bluegrass has been found to outperform HGT.

The parent stock for HGT came from hearty Kentucky bluegrass plants which had survived intense artificial traffic applications in 2001. Beyond their traffic tolerance, however, the plants also showed rapid recovery afterwards.

But Barenbrug wasn’t satisfied with those traits alone. So, with three more years of work, subjecting the plants to heavy disease pressure in Mid-Atlantic States, they came up with a bluegrass plant that was ready for seed production. After more than a decade of experience, HGT is now legendary for its durability and recovery properties. HGT is remarkably disease tolerant to Summer Patch and equally resistant to damage from billbugs and white grubs.

Summer Patch can wipe out Kentucky bluegrass completely. HGT is a different story altogether. Tested intensively on many locations across the country and in university trials, HGT stood out for its resistance to Summer Patch. In the National Turfgrass Evaluation Program (NTEP) tests, HGT actually took over some heavily affected neighboring plots. “Barvette HGT (BAR VV 0709) was the top TQ entry in the transition zone region, probably because of its excellent Summer Patch tolerance” (Kevin Morris, Executive Director NTEP, TPI Turf News July/August 2011). HGT is the first bluegrass that can withstand or recover very quickly from this disease.

As mentioned, HGT not only tolerates traffic but it recovers very quickly from traffic damage. In research studies at Michigan State University, HGT was compared to other high-ranked Kentucky bluegrasses. In every trial, HGT did considerably better than other popular varieties, like Midnight, Prosperity and Jumpstart. Likewise in the NTEP traffic stress tests, HGT came out head and shoulders above other entries both at Michigan State University and Rutgers University trials.

Of all of the NTEP-rated grasses, HGT is the highest ranked for tolerance against wear. Six other Barenbrug grasses are ranked in the top ten of that same list.

Spring green-up is challenging for most Kentucky bluegrass varieties. HGT breaks the barrier on that account. It greens up in the spring like no other bluegrass, even on sports fields that are used all winter long. HGT is a blessing for turf managers needing an early spring season with healthy, green grass.

White grubs and billbugs can devastate Kentucky bluegrass. That’s not the case with HGT. The NTEP tests acknowledged HGT for having the highest tolerance against these bluegrass foes.

An important part of HGT is its quick germination and establishment. Whether you need your sports field ready quicker, to harvest sod faster or just to have your fairway ready for golfers sooner, HGT will get the job done. Count on HGT to germinate in as few as seven days, depending on weather conditions.

Note: HGT is sold in blends as TURF BLUE HGT. 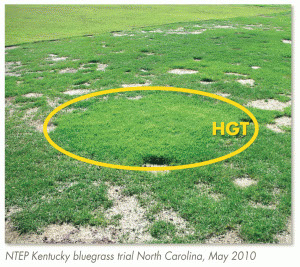 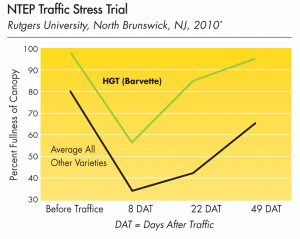 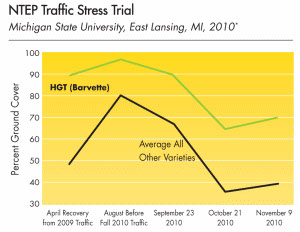 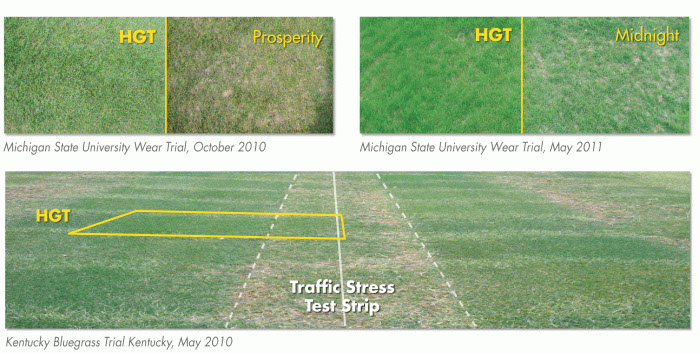 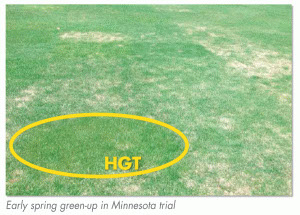 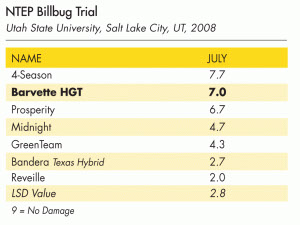 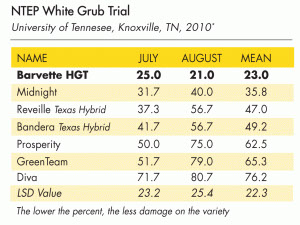 “The HGT we seeded in late April germinated and filled in tremendously compared to the other bluegrasses used. Despite hot, humid summers in Philadelphia, HGT survived without any dieback. I was very pleased with HGT and see a fit for this grass in the future on sports fields."-Tony Leonard, Director of Grounds, Philadelphia Eagles.