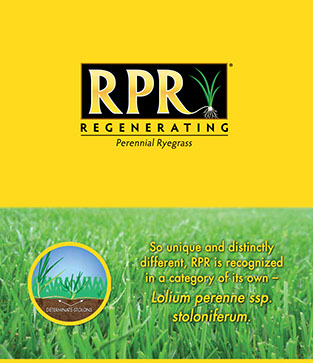 What is RPR™ Regenerating Ryegrass?

Barenbrug’s innovative research and development has produced a new star; a tough perennial ryegrass, RPR. Regenerating Perennial Ryegrass, or RPR, stands up to heavy traffic while keeping its good looks. A creeping perennial ryegrass, RPR outperforms traditional perennial ryegrass. It’s also more resilient and weather tolerant. Because RPR is chosen for top professional sports venues, it could be an ideal choice for your sports field, golf course, lawn or landscape.

It is RPR’s regenerating ability that separates it from traditional perennial ryegrass. A product of advanced conventional breeding techniques, RPR plants develop determinate-stolons, which allow them to regenerate in all compass directions. Determinate-stolons arise from an auxiliary bud near the base of the mother plant and then grow horizontally at, or just below, the surface of the ground, creating identical new plants as they grow. RPR got the attention of plant breeders at the Barenbrug research site in Virginia where new grasses are developed for wear, drought and cold tolerance.

Researchers noticed that RPR was thriving under tough conditions, expanding even in high stress areas, for example, where the tractor made turns at the ends of rows towing the wear simulator equipment. Next, RPR was tested at Barenbrug’s research fields in Oregon. Plant breeders studied the lateral growth of RPR under frequent mowing when the plants were space-planted. Below, the photo shows how RPR spreads compared to an average perennial ryegrass plant.

Determinate-stolons, sometimes called “runners,” are growth shoots emerging from auxiliary buds at the base of each plant. When an RPR plant gets room, say, when a divot is removed or the turf is otherwise damaged, determinate-stolons will grow horizontally into the empty area and develop roots at its internodes. See the photos below, showing RPR plants, determinate-stolons and the developed roots.

Notice in the graph below how, on two recording dates, RPR was much larger than a typical perennial ryegrass. At the later date, the circumference of the RPR plant was 33 inches compared to perennial ryegrass, measuring 24 inches. The difference gives a 25 percent edge to RPR. Within a year, the RPR plants were well rooted and had spread to three feet wide. Barenbrug extensively tests all its varieties and RPR is no exception. It has exceeded the company’s most stringent quality requirements for wear tolerance, drought tolerance and turf quality.

RPR performance has been tested intensively at different research universities where it was analyzed for fundamental characteristics including wear tolerance. The results: RPR is vastly superior on wear tolerance compared to any other perennial ryegrass. The turf quality also remains high, even under the heavy wear. At The Ohio State University, research plots were rigorously subjected to artificial traffic. In the graph to the right, you can see the dramatic increase in tolerance from RPR. Likewise, RPR was tested for wear tolerance at the Southeastern Turfgrass Research Center, Lexington, Kentucky. As in The Ohio State University study, the results show RPR a clear winner against other perennial ryegrass.

Barenbrug agronomists also tested RPR for turf quality at several sites in the US. The graph to the right shows the turf quality of RPR compared with regular perennial ryegrass. The data was gathered at the Southeastern Turfgrass Research site in the fall, when grasses are under more stress. Look at how RPR sustains its high quality turf rating.

RPR blends and mixtures Perennial ryegrass is often used by itself but also in blends with other species. Likewise, RPR can be purchased and used by itself (100% RPR) or in various mixtures and blends, for example, with Kentucky bluegrass, tall fescue or turf type annual ryegrass.  RPR varieties will all feature the traditional BAR prefix, as do most Barenbrug grasses. The name endings will be associated with the Greek alphabet. So, for example, the first two varieties are Baralpha and Barbeta. More varieties are being bred and will be released in the coming years.

Perennial ryegrass is often used by itself but also in blends with other species. Likewise, RPR can be purchased and used by itself (100% RPR) or in various mixtures and blends, for example, with Kentucky bluegrass, tall fescue or turf type annual ryegrass.

The recommended seeding rate of RPR is 300 lbs. per acre, or about 7 lbs. per 1,000 sq. ft. While RPR has been tested at several mowing heights, Barenbrug recommends a cutting height of 1.5 inches for best performance but can tolerate mowing heights as low as 0.5 inch. RPR needs about the same amount of fertilizer annually as regular perennial ryegrass. The variety is very drought tolerant and disease resistant. RPR is also endophyte enhanced, which makes this grass more resilient. 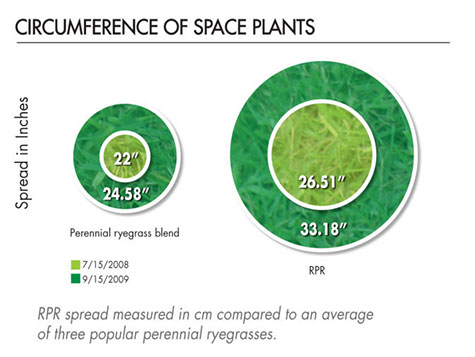 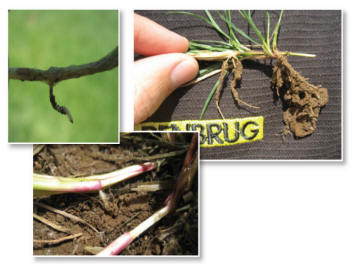 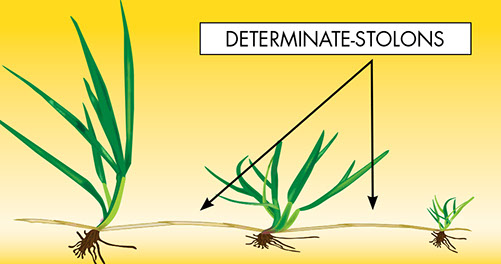 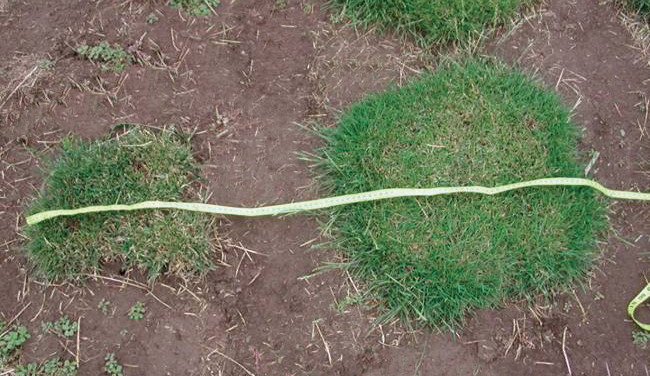 At left regular perennial ryegrass. At right RPR. After one year. 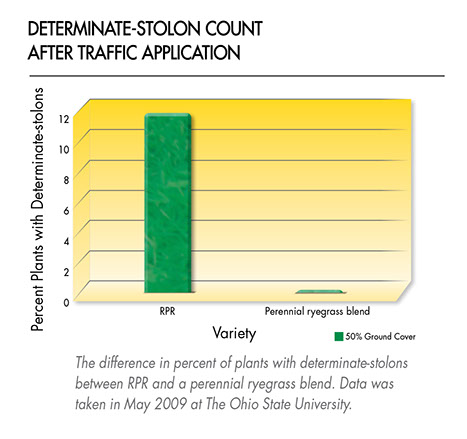 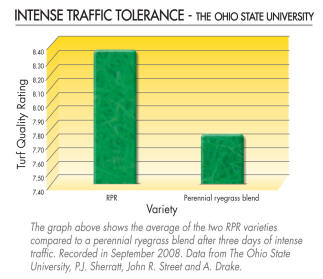 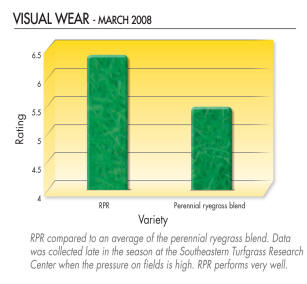 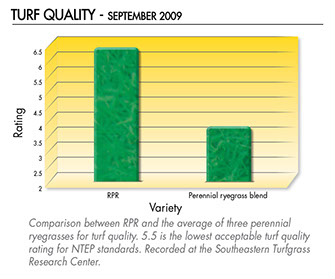