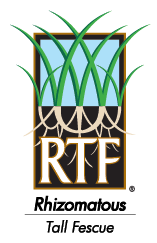 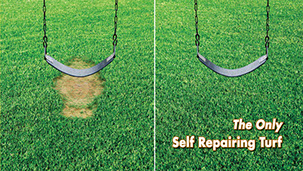 What is RTF® Fescue?

RTF [ rhizomatous tall fescue] is an advanced turf-type tall fescue that produces  rhizomes. Rhizomes are small underground lateral shoots that allow a plant to spread laterally.  This enables the turf area to self repair itself.  This self healing trait has been limited to bluegrass. Fescue, which is classified as a "clump grass" has never had this ability.  Now you can have a lawn with the best traits of  both bluegrass and fescue in one grass, Water Saver RTF Sod.

RTF Water Saver Sod is so scientifically advanced it was awarded a patent. Unlike other fescues, RTF does not produce “ugly clumps" and is self-repairing by means of rhizomes; underground roots that spread and fill in bare or thin spots. RTF also uses less water than other fescues, is disease resistant and repels surface feeding insects.

RTF is so revolutionary, Barenbrug USA, the seed company that developed it has entered into a license agreement with the RTF Turf Producers Association.  This association was developed with the sole purpose of producing and marketing RTF fescue sod.  Headquartered at Mead, Nebraska, this association licenses turf producers around the country to produce this remarkable new sod.  Only the best turf farms will be allowed to grow RTF fescue.  Todd Valley Farms is one of the few farms in the world to receive this honor.  We serve the Omaha, Lincoln, Des Moines and northern Kansas City metro area.   To learn more about RTF "Water Saver" sod, go to www.rtfsod.com.

What about other fescues with Rhizomes?

Technically speaking, virtually all fescues can produce a rhizome.  But these will only grow to be about ¼ inch long making it pretty much useless.  They do not prevent the wide bladed clumps that fescues are noted for.  These so called rhizomes do not self repair in a reasonable time.  While not totally false, these claims are very misleading.  RTF is the only fescue to receive a US  Patent.  Patents are only granted if the grass has a very unique difference compared to other varieties in the same species.  Rhizomes were listed as this unique difference. 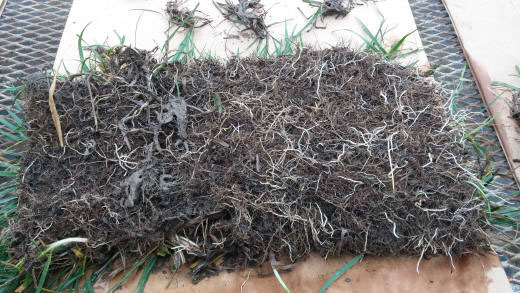 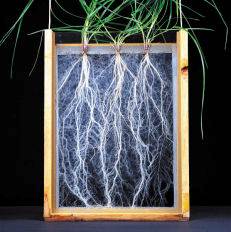 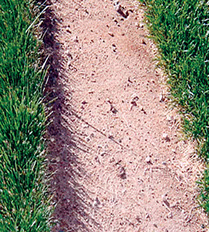 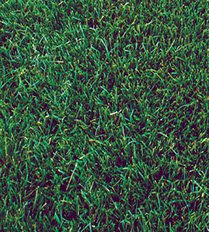 "When I first learned of your seed, I was skeptical at best, but willing to try anything in the shade under the burr oaks that produced nothing more than mud in my yard.  The RTF was not only the perfect solution for that area, but I am now living with the value of the low water requirements of the RTF.   My house backs to a large treed park.  The lawn is so beautiful even the parks personnel comment on it."- Fred Assam, South Dakota